With the cooperation of Cerulean Blue, we held an online tour of Okinawa on Friday, 18th March 2021.

< Program >
14:00-15:00 About the Battle of Okinawa /About the Himeyuri Memorial Tower / Peace Memorial Park
15:00-16:15 History from the Ryukyu Kingdom to Okinawa Prefecture / History from the Battle of Okinawa to Return to the Mainland / Incidents and Accidents Stemming from U.S. Military Bases / Citizens’ Movement / Relocation of Marine Corps Air Station to Henoko / Q&A
16:15-17:00 Discussion

After the lecture about the detailed history of the Battle of Okinawa, the tour guide explained to us about Himeyuri memorial Tower while watching a video. Then she showed us around the Peace Memorial Park on time and talked about the topics requested beforehand by the working group.

It was a valuable opportunity to learn about Okinawa and Japanese history, especially for students who said what they had learned at school about Japan during World War II were only about Hiroshima and Nagasaki. During the Q&A and the discussion, the participants exchanged views on issues such as the description of civilian “mass suicide” in the Battle of Okinawa in the textbooks, the child soldiers in Sierra Leone, the issue of U.S. military bases in Japan, and the issue of comfort women, which provided us an opportunity to reconsider the history and peace of Okinawa, Japan, and the world.
Participants: 13 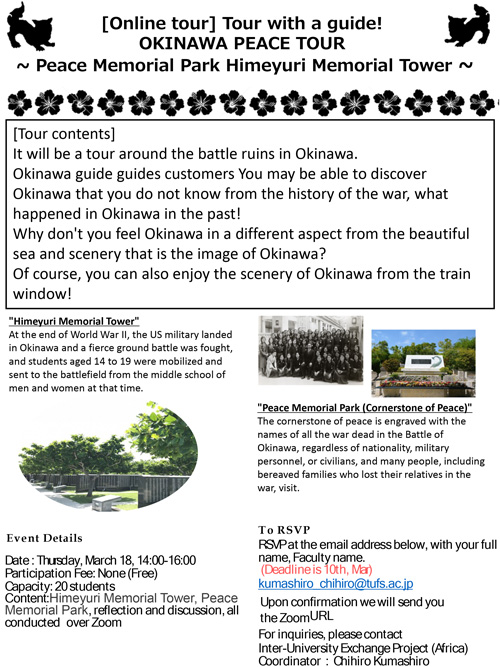