【The 47th ASC Seminar】Land and Youth Migration in Africa: the Case of Two Districts from the Highlands of Ethiopia

Title: Land and Youth Migration in Africa: the Case of Two Districts from the Highlands of Ethiopia 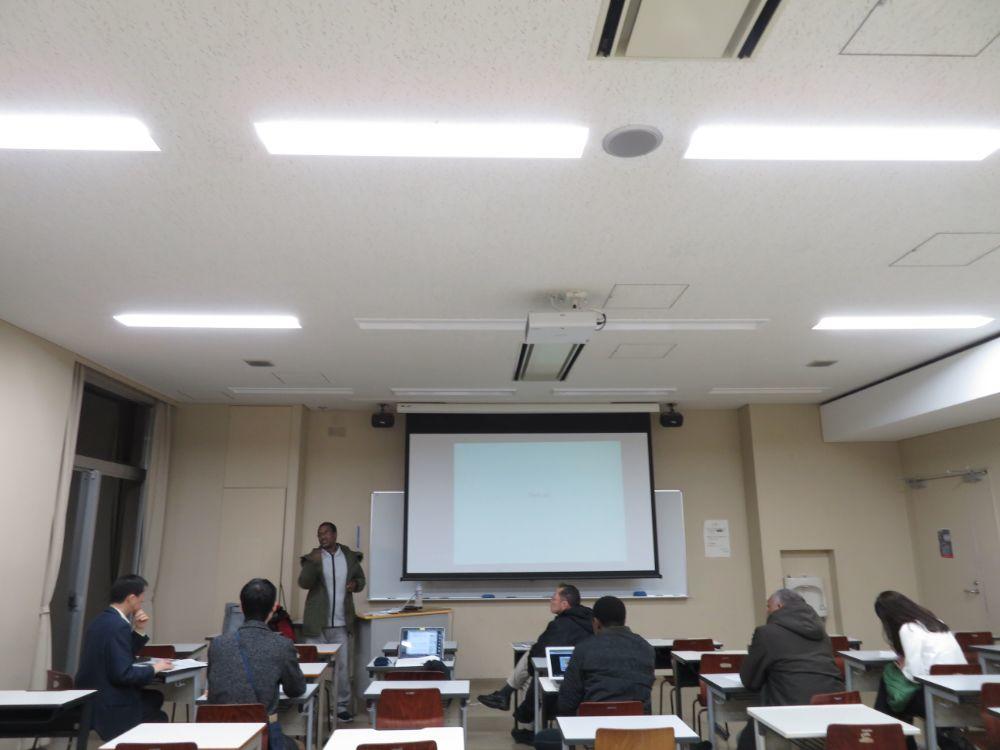 Dr. Teshome began by explaining that this research is part of a joint research funded by the International Fund for Agricultural Development (IFAD) and carried in two selected districts in Ethiopia and the objective was to explore the challenges and opportunities for rural youth employment and to inform policy and programs.

Initially, he presented data about youth in Ethiopia showing that 37% of the population was between the age of 15 and 34 and 61.42% were between the ages of 0 to 24. This was followed by an explanation of the methodology of the research, focused on the districts of Bora and Kuyu in Oromia region with informants between the ages of 18 to 30.

Presenting the preliminary findings, Dr. Teshome explained that there was no problem of land in the Bora district, and there is opportunity for farming as well as non-farming activities such as brokerage (dalala). Contrastingly, while in Kuyu district, the main activity is farming and milk production, the youth is restricted from this opportunities because they do not own land.

He proceeded to explain the legal framework of rural land in Ethiopia, highlighting that the land is an exclusive state propriety where only 21% of the rural land is owned by the youth of which only 3% is owned by young women. He mentioned that the main challenge is land scarcity because of its concentration in the hands of the families and absence of land redistribution. He argued that alternative land access opportunities are through share cropping, labor to cash or labor to crop, traditional means of lineage inclusion, and contract systems.

Addressing the patterns of migration, the speaker noted that there was migration of the youth in Kuyu to Arab countries or within the Oromia region due to land scarcity. And contrastingly migration is not common in Bora due to diversification of livelihood. And regarding youth aspirations, according to the informants, they want to do non-manual labor work.

The challenges identified by the speaker are: serious lack of land in Kuyu, no financial support and no networking systems for the youth in both districts. In conclusion, he argued that since the young people are migrating from Kuyu area, there is a decrease in productivity; there is commercialization of agriculture land by the landholding families, off-farm jobs are directly related to outward migration, and families encourage the female youth to migrate abroad. As solutions, the speaker proposed a better access to financial resources, land law in favor of the youth such as readjustment or resettlement programs to support the youth in Kuyu district, and developing control systems over illegal trade in Bora district to prevent the illegal actors.

In the Q&A session, Dr. Teshome discussed with the audience topics related to youth engagement in sand mining, migration and labor conditions of African workers in Arab countries, land policies during the communist era, the interest of youth in agriculture, the role of education in the aspirations of youth and the impact of land inputs .