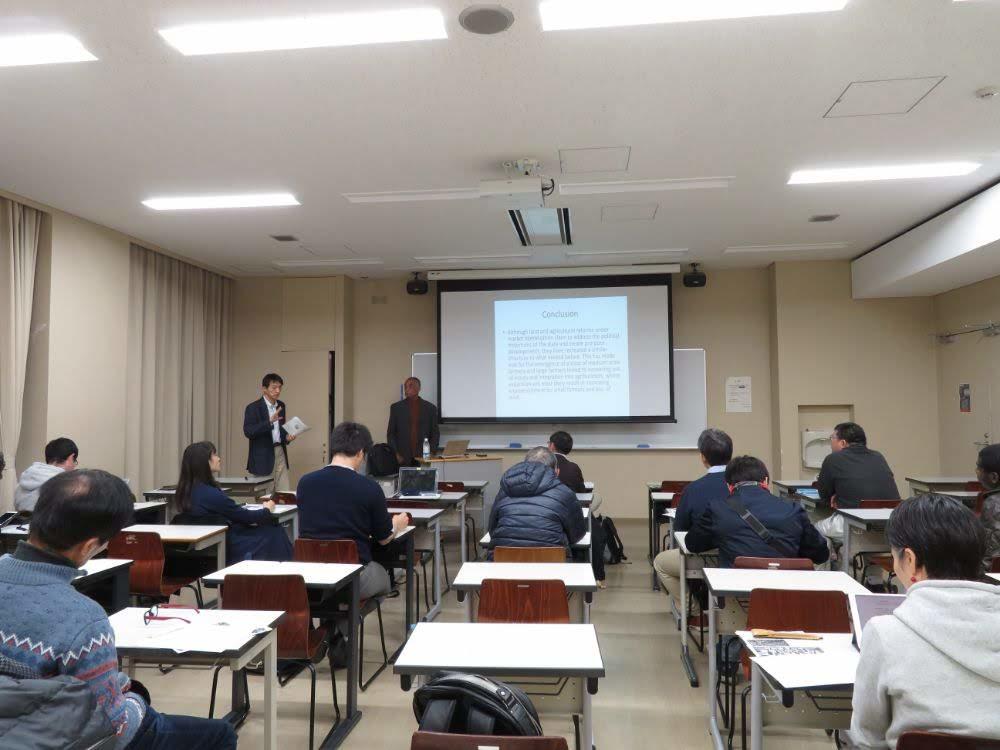 The 46th ASC Seminar featured a prominent scholar in Land Administration Reform, Dr. Kojo Amanor. The speaker began by providing an overview of the evolution of land reforms objectives from land distribution to institutional reform and focus on customary rights.

Dr. Amanor discussed the international donors' role in this reforms and criticized the World Bank consultants who write about land reform not addressing the academic debate going on in Africa around this issue. He argued that current reform policies reflect donors concerns of owning markets to foreign investment, decentralizing the state and creating a framework for secure agricultural investment and collateral investment which translates to private property.

He proposed to look at the framework of land administrative reforms and how it applies in Ghana and the interactions between the objectives of the reform process and the actual structure of agriculture commercialization. He began discussing this topic by mentioning the assumption that there have been significant developments related to increasing of production of crops and access to inputs which impacted positively both large scale and medium scale farmers seen as an example of success. But in a more critical view, the medium scale farmers can be understood as a process of land appropriation and commodification of land. He highlighted that the land reform was built in the back of customary land relations, in contrast to previous approaches where these relations were seen as backward. The main framework now is to see custom as something dynamic and adaptive to the new developments of agriculture which is also the dominant framework of the World Bank although still focused on the individual tenure despite studies showing that there is no correlation between individualization and efficiency of production.

Then he talked about the movement towards marketization which was seen as an efficient process of change reflected by the scarcity factors and which the government's role was not to interfere but to simply facilitate by recording these transactions to harmonize the identification of land owners and minimize the risk in commercial translation as well as to introduce taxation.

Dr. Amanor subsequently addressed the shift in focus in the World Bank policy from focus on small farmers to the recognition of social differentiation and from the need for the poor to commercial agriculture making way for more efficient commercial farmers. He mentioned that when it came to the implementation of these reforms in Ghana the main reform was the creation of the customary land secretariat s which were to record the land transactions with the cooperation of the chiefs. The land administration was to strengthen the capacity of customary land secretariats to manage land in a transparent way and to harmonize with the government sector. But there were some challenges to the effectiveness of the secretariats: it was not comprehensively established in the country; in some areas some chiefs had already taken the initiative to register land, specially in urban areas with high demand; land sales were mere common in the urban areas where people don't operate in the customary mindset; and the chiefs are not protecting the land but simply transferring to individuals and receiving rents in the process.

He also noted that most rural families are not getting their livelihood through land, are moving to urban areas and their access to land is no longer through inheritance but gradually through share cropping or renting.

He concluded that although the agriculture reforms claimed to address political distortions of the state and to have created enabled markets that increased the living status, in reality, the farmers who collapsed in the crisis of the 1980s have reestablished themselves with all the inputs that have been introduced to create markets for the large international agribusiness companies and this developments are going to create further impoverishment to the small farmers and loss of land.

In the Q&A Session the speaker discussed with the audience the recent emergence of transnational activism to agribusiness, food sovereignty, traditional land ownership, the definition of new wave of land reform, agriculture value chains, smart subsidies, land administration and issues with tenure and community members discontentment over land sales and the impact of these complaints.