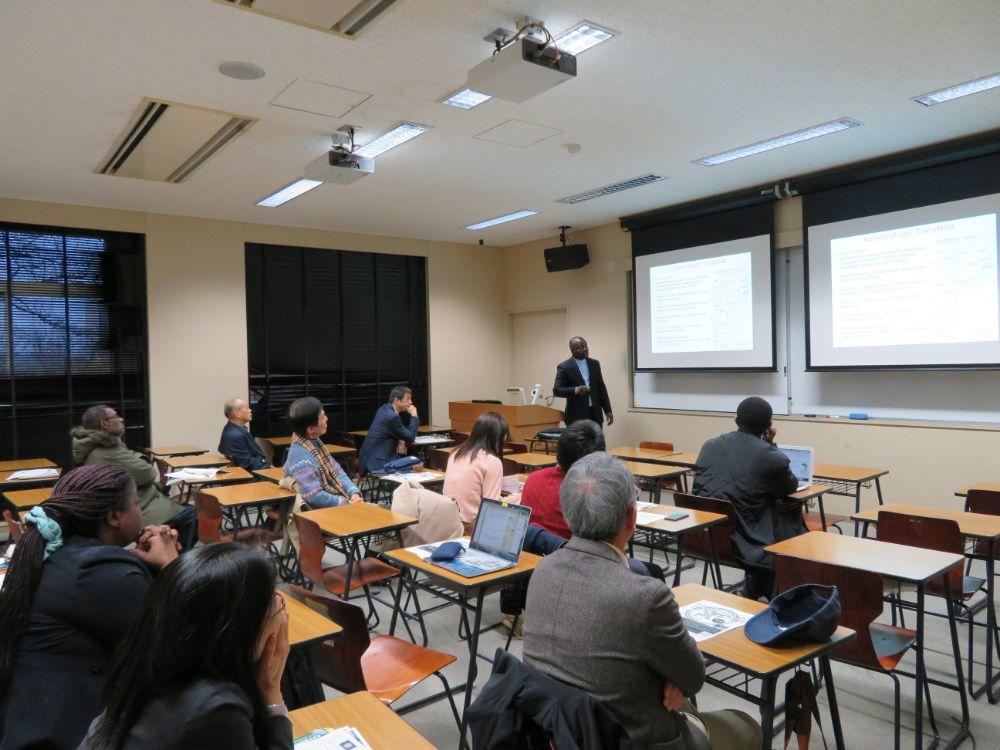 Dr. Uache started the seminar by giving an outline of his presentation and an introduction to his theme by pointing some of the characteristics of the Southern African Development Community (SADC). Then he provided a timeline of the origins and evolution of this regional body from the informal arrangement of the Front Line States in 1977, to the Southern Africa Development Coordination Conference (SADCC) in 1980 to finally, the restructuring in 1992 to what it is today, the Southern Africa Development Community (SADC).
He proceeded to explain some of the political and economic processes that the organization has. In terms of political challenges, he argued that the military intervention in the Democratic Republic of the Congo (DRC) as a unilateral decision by some of the member states, has led the way for SADC to evolve, creating a Strategic Indicative Pan for the Organ (SIPO), which has improved the coordination and the mediation of the tensions between the member states.

On the economic processes, he pointed the failure of the first Regional Indicative Strategic Development Plan- (RISDP) in terms of the implementation of its goals, being only the the Free Trade Area (FTA) accomplished. However, he casted a more positive light towards the new RISDP and it's Industrialization Strategy for 2015-2063, connecting it to Mozambique's Potential economic contribution to the region. This was preceded by a brief contextualization of the political and economic developments in the country such as the civil war, change of political orientation and most recently the new Foreign Direct Investments (FDI). The speaker highlighted Mozambique's strategic location as a rim land country, facilitating the trade of the hinterland countries. He also mentioned the country's endowments (natural gas, rivers, ports and reserves of coal) and its potential for industrialization. Dr. Uache also went beyond the regional framework to point Mozambique's advantage to International Trade with Asian Countries and Japan in particularly in the areas of energy, agriculture, infrastructure and technology. Before concluding he also mentioned some of the challenges that the country faces such as political instability, the standstill status of the gas exploration, climate change and its impact to agriculture and the need to diversify its economy. He concluded that Mozambique is aware of its potential and ready for cooperation.

In the Q&A session, the speaker had a long discussion with the participants about Democracy, the State's multiple membership in regional organizations, the asymmetric interdependence between SADC members, the challenge presented by the informal sector and the imbalances in the Free Trade Agreement.