On Saturday, July 9, 2022, a screening of the TUFS Cinema Malaysia documentary film The Tree Remembers was held at the Agora Global Prometheus Hall.

Directed by Lau Kek Huat, a Malaysian-Chinese living in Taiwan, the documentary presents the painful history of the Orang Asli, an indigenous minority living on the Malay peninsula, weaving its story with archived photographs and video materials tracing the history of the 513 Incident, an ethnic Malay and Chinese riot that led to 196 dead and 439 injured, and the outcome of the deforestation and Islamization (assimilation) policies violating the minority’s customary land use.

After the screening of the entire film, Mr. Shigeru Morita, an expert in Singaporean film studies, gave a presentation on the problems and history of Malaysia as a multi-ethnic nation as reflected in the documentary. 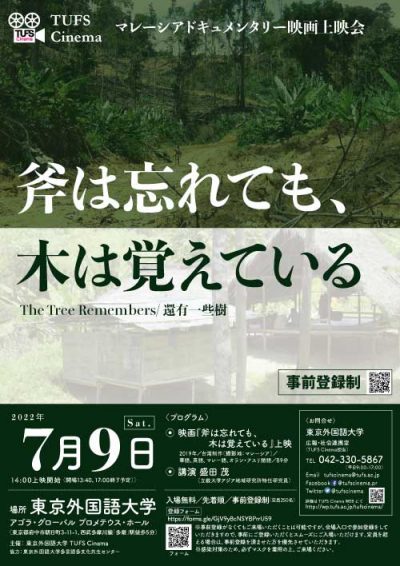