My experience in Japan: At Sea in Tokyo

Prof. Kojo Sebastian Amanor, a professor of University of Ghana, who has stayed in Japan as a visiting professor of our center from September 2019 to January 2020, sent us an essay about his experience in Japan. While many African people are conservative about food, Prof. Amanor loves Japanese food such as seafood and sake.

In his essay, he tells us what he has seen and experiences, sometimes coparing them with the ones in Ghana. The following is his essay.

At Sea in Tokyo

I arrived in Tokyo at the very beginning of October 2019 to teach at Tokyo University of Foreign Studies, over the next four months. I marvelled at the futuristic minimalist architecture of the TUFS building. My office was on the eighth floor with an iconic view of Mount Fuji out of my window, which from time to time would pop out of the cloud cover and mist on bright days. 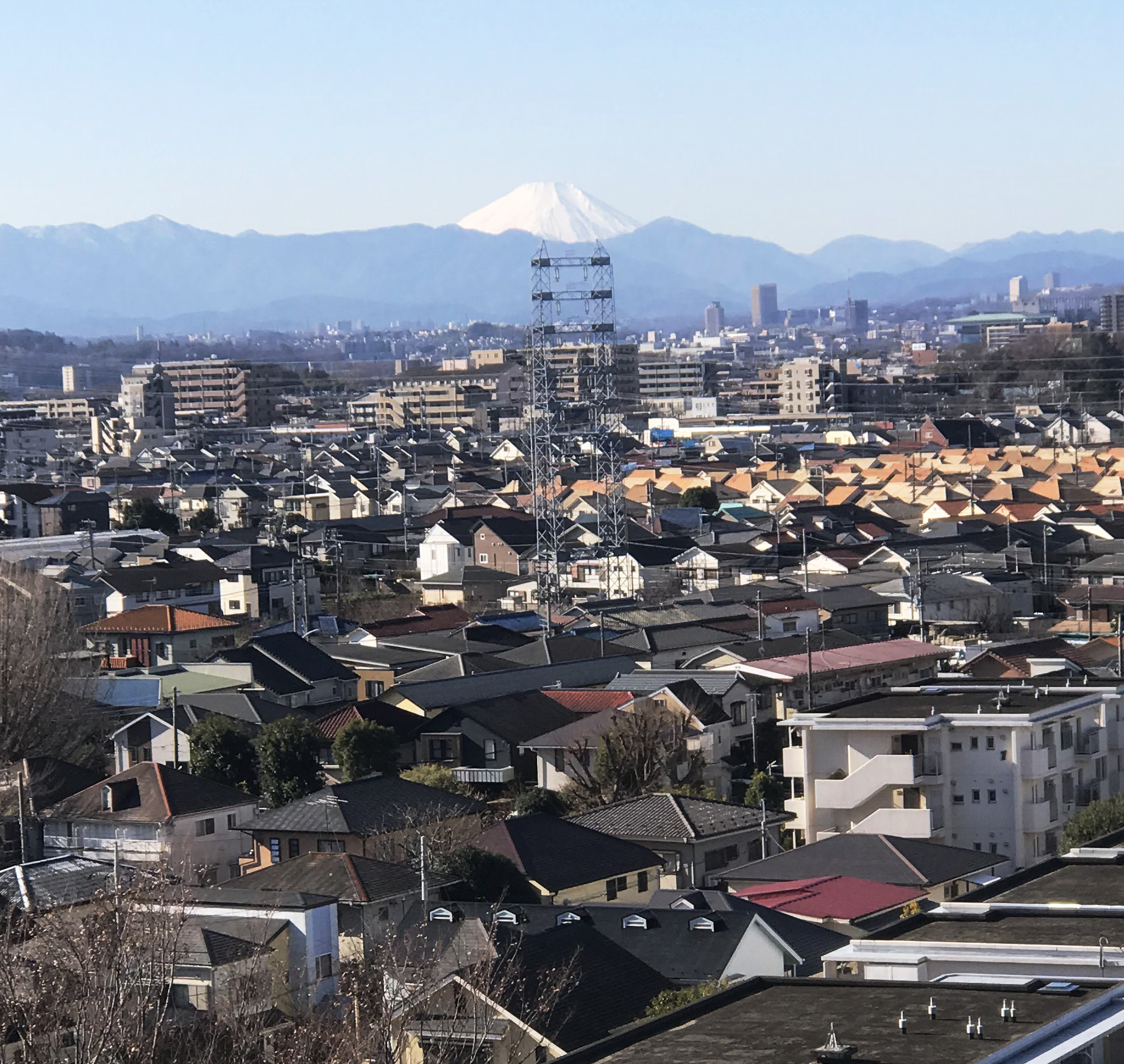 An office with a view: Mount Fuji seen from TUFS

I taught a course on Development in Africa to second year undergraduate students, which sought to place development within a historical perspective and challenge mainstream doctrines of development. This proved to be challenging, to find readings that would resonate with Japanese students. In teaching in Japan it became painfully obvious how much of the discourses in African Studies, African History and Development in Africa was rooted in debates generated in the US, and often fashioned by US sensibilities. I tried to get the students to examine development through addressing how development was constructed in Japan and Japanese history. Strangely, they were noticeably silent on this issue. However the students were very interested in Africa and their enthusiasm and commitment was very rewarding and refreshing for me. Student life at TUFS was full of energy and cultural dimensions. Before the cold weather set in several student musical bands assembled during the lunch break to perform rock music and other times Brazilian bossa nova classics. The half term break was also full of many cultural performances including music and dances and the cooking of food from all around the world. But most of these performances were of Western pop music with Japanese folk music very much relegated to the background. This contrasted with my experiences of Ghana were there were probably less enthusiastic participation in cultural activities among students, but more emphasis on building upon Ghanaian musical traditions or hybrid music which domesticated western genres to local sensibilities and language.

Walking around the Fuchu area, I became aware of the large areas of greenery and parks, which were often associated with temples and shrines. These seemed to form an underlying part of the infrastructure of Tokyo. A visit to Kyoto also revealed the splendour of Japanese temples and often the beautiful localities in which they were situated. This reminded me of many sacred groves in Ghana, which also celebrated areas of natural beauty; such as the headwaters of the Tano river, as in the Tanoboase grove, or wild animals, such as the Fiema-Boabeng monkey shrine or the Buoyem bat caves. But in Ghana these groves have become very much marginalised, particularly in urban areas, probably as a result of the expansion of Christianity, which often associated these with 'heathen' practices. In Japan the most famous of these shrines have become very busy tourist sites. However, I felt that the pressures of the vast array of tourists descending on them and the growing commercialisation are in danger of detracting from the serenity and beauty of these sites. In many ways the small temples that were integrated into the Kyoto market had more charm for me, with their diversity of patrons and identities, and particularly since they functioned within the local community and were integrated into its economy. This was also the case in Tokyo where the largest temples have largely become tourist sites, but where there are also many small temples and shrines integrated into the community and the daily bustle of the city.

Finding eating-places was one of the major challenges that I faced at the beginning of my stay. I was surprised at the wide variety of delicious foods offered in the TUFS cafeterias. The myriad of different small restaurants, and bars was a major charm of living in Tokyo. But being able to deal with the savoir-faire of these and pluck up courage to enter was not easy. Apart from language difficulties, in some of these one needed to remove shoes, sit on the floor, order from a machine, and even cook you own okonomiyaki noodles or fresh fish on grills on the table. The get-togethers after seminars at TUFS provided a much-needed and appreciated guided introduction to the restaurant culture of Tokyo.

There were many beautiful small eating-houses and bars around Musashi-Sakai and Kichijoji and I was often amazed at how the owners had been able to organise such small spaces to exude such a wonderful ambience. One of my favourite eating areas was in the streets of the Okachimachi market. My favourite food became tekkadon, raw marinated tuna with rice with seaweed soup served in a separate bowl. These small eating-places reminded me of street food kiosks in Accra. Although these lacked the sophistication of Tokyo, and were often dilapidated, rundown, and run on small budgets in the informal economy, they reflected a similar class of small artisans, and served as an inspiration of how these could develop in better times. I particularly remember an area around the airport in Accra in the 1990s, made up a quarter of informal eating places, in which a wide variety of local treats could be sampled, which gave much character to the airport. This quarter was pulled down in the mid nineties under, in my opinion, the misguided notion that it was an eyesore to the cosmopolitan traveller. Since then there has been an expansion of characterless fast food global franchises and international fast food joints that completely lack any cultural character and exude any cultural vibe. Tokyo offered an insight into a modern cuisine rooted in the culture of the street and neighbourhood; in which the innovation, diversity, and wholesomeness of the local far outstrips the monotone of global fast foods. 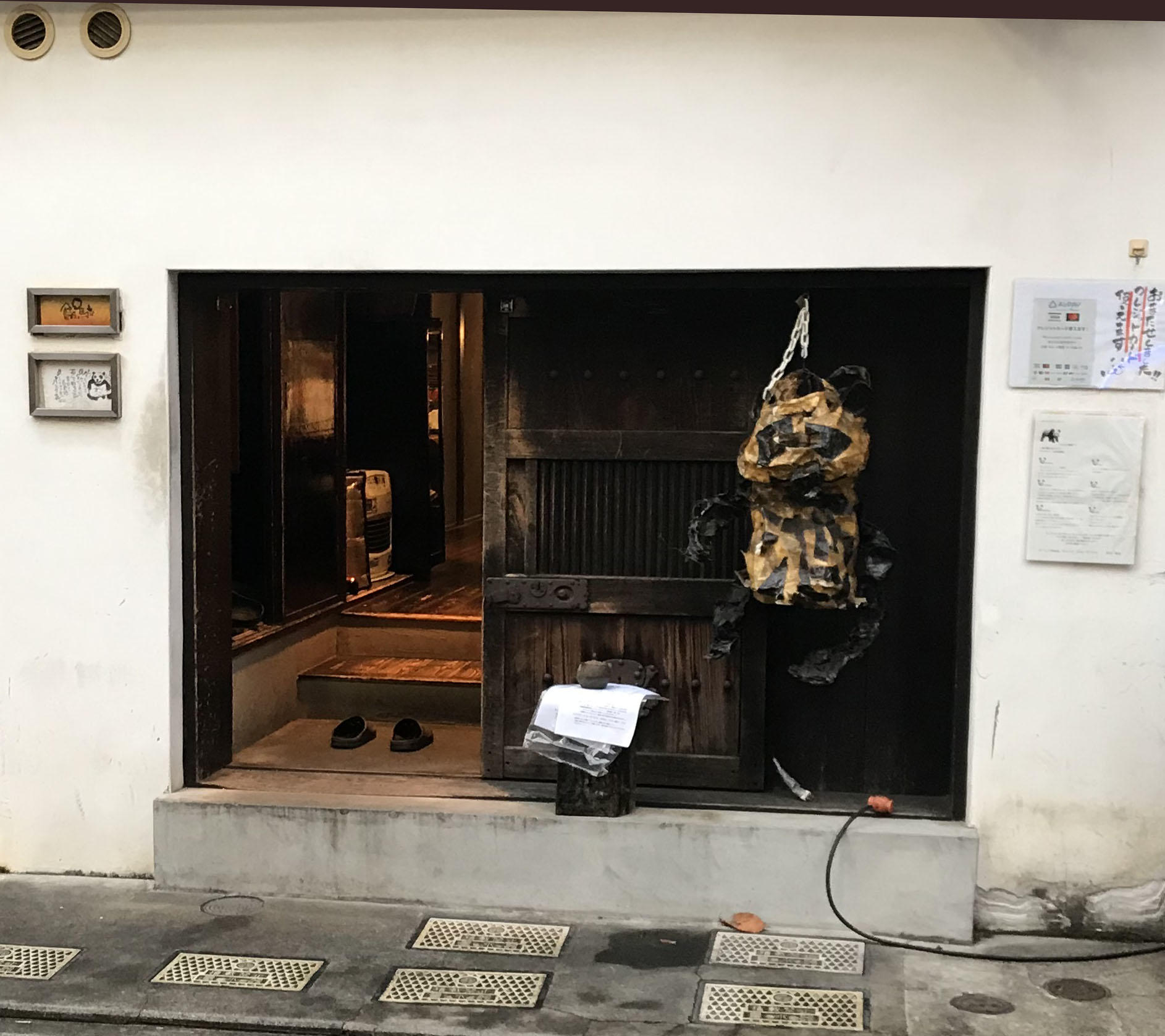 A cool Musashi-Sakai bar with ambience

The supermarkets also struck me with their wide variety of regional foods from Japan alongside the products of global food chains. As one of the areas I work on concerns agricultural food chains and its impact on small-scale farmers I became interested in these. I particularly became interested in how seaweed (Wakame, Konbu and Nori) was produced. A colleague of mine, Yuka Tomomatsu, arranged for me to visit an association of fishermen and seaweed producers at Kanazawa, Yokohama. We met with Mr Kigawa, Kubatera and Hasewaga. The seaweed producers gave me a wonderful welcome and made much time available for me. It was truly a memorable occasion. They had also taken the trouble to go on the Internet to find out something about Ghana. They knew of Ghana as the producer of chocolate, which gave its name to a highly popular chocolate in Japan, but not much about its seaboard sectors. But they were able to offer insights and advise about how to go about looking for viable edible seaweeds in Ghana based on the feeding patterns of crabs, clams, octopus and other sea-dwellers. In many ways their experiences were similar to Ghanaian fishing communities, for they were fishermen who had turned to seaweed production as the fishing sector became increasingly dominated by large corporations and trawlers, which were able to take out the majority of fish at the expense of the small-scale fishermen. While retaining their community identity these fishermen also used scientific knowledge in organising their production of seaweed and were well versed in the latest technologies. We went out in Mr Kigawa's boat to see how seaweed was produced on ropes tied to buoys out in the sea. The seaweed producers explained how in many areas in Japan seaweed production was suffering from rising sea temperatures, but this had not effected production in the Yokohama Kanazawa bay. Many specialists were visiting them to try to find out why their production continued to be so successful and involving them in research. This was a very inspiring occasion, again showing the resourcefulness and creativity of small-scale producers in Japan and their immense contribution to the national economy, national culture, and vitality of communities and neighbourhoods. But it also gave me a looming sense of Japan at a crossroads, as the global economy is increasingly dominated and controlled by a handful of corporations that threatens the vitality of neighbourhoods, artisans and small-scale producers. 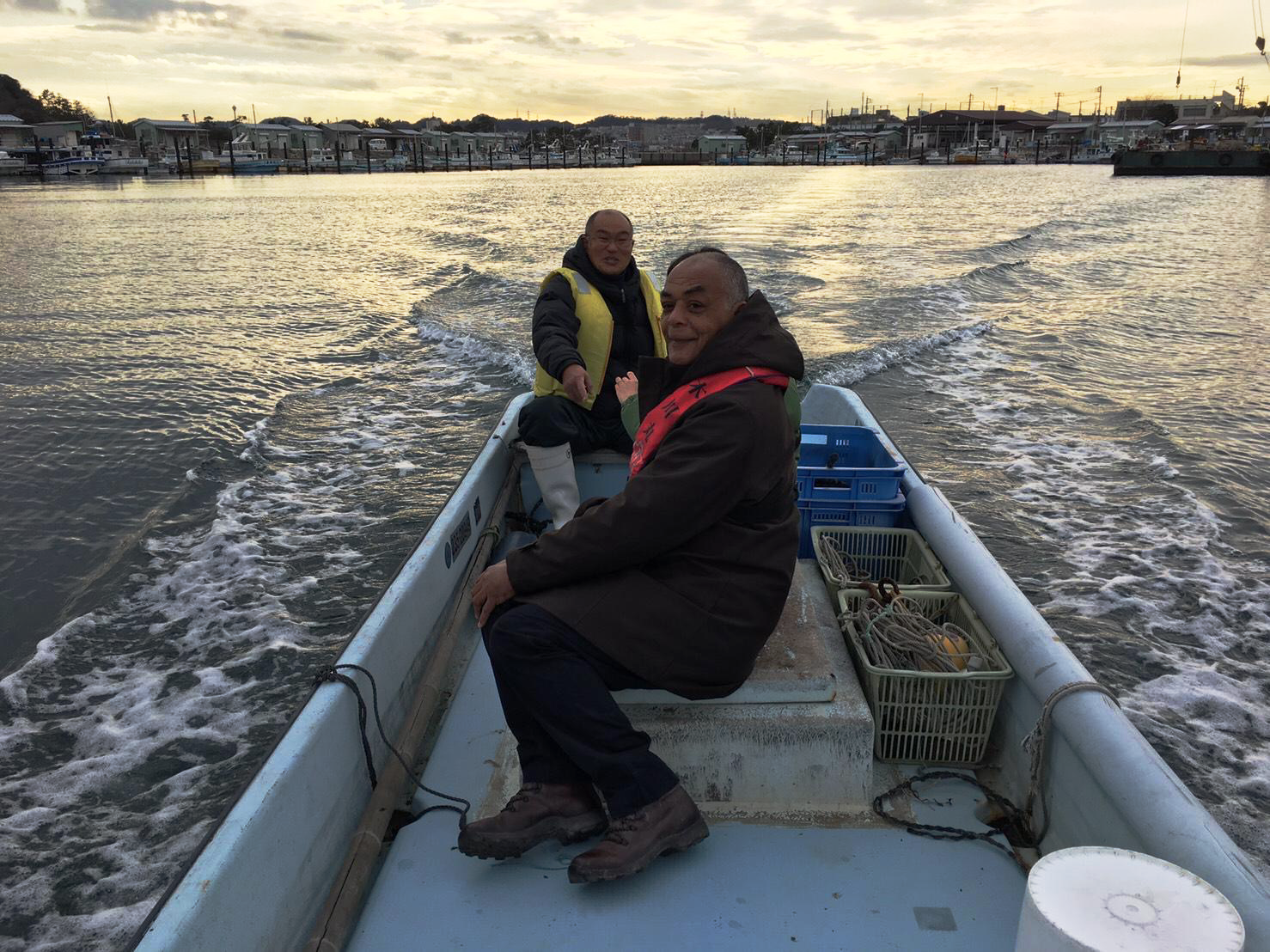 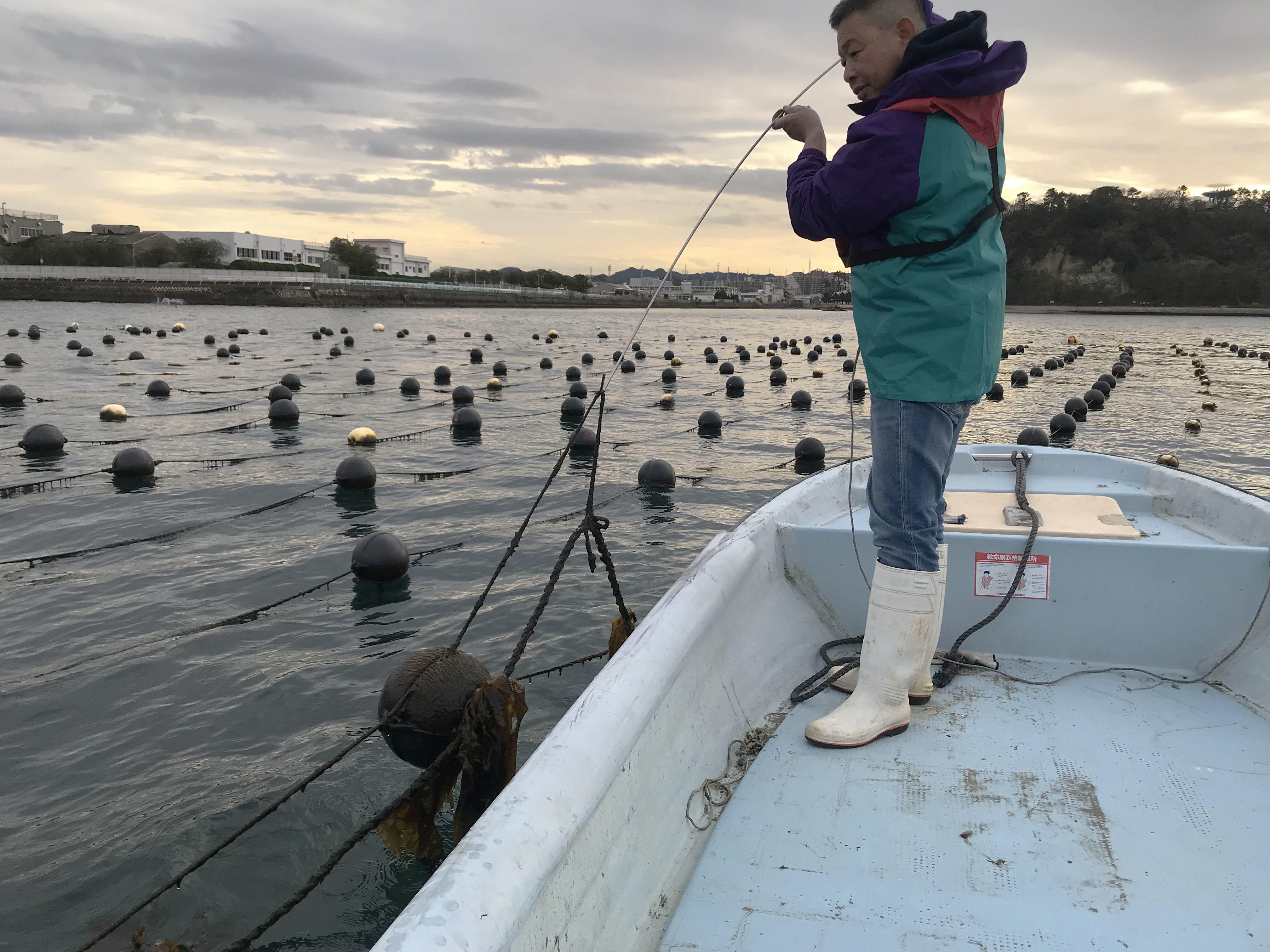 Kagawa-san shows how seaweed is cultivated 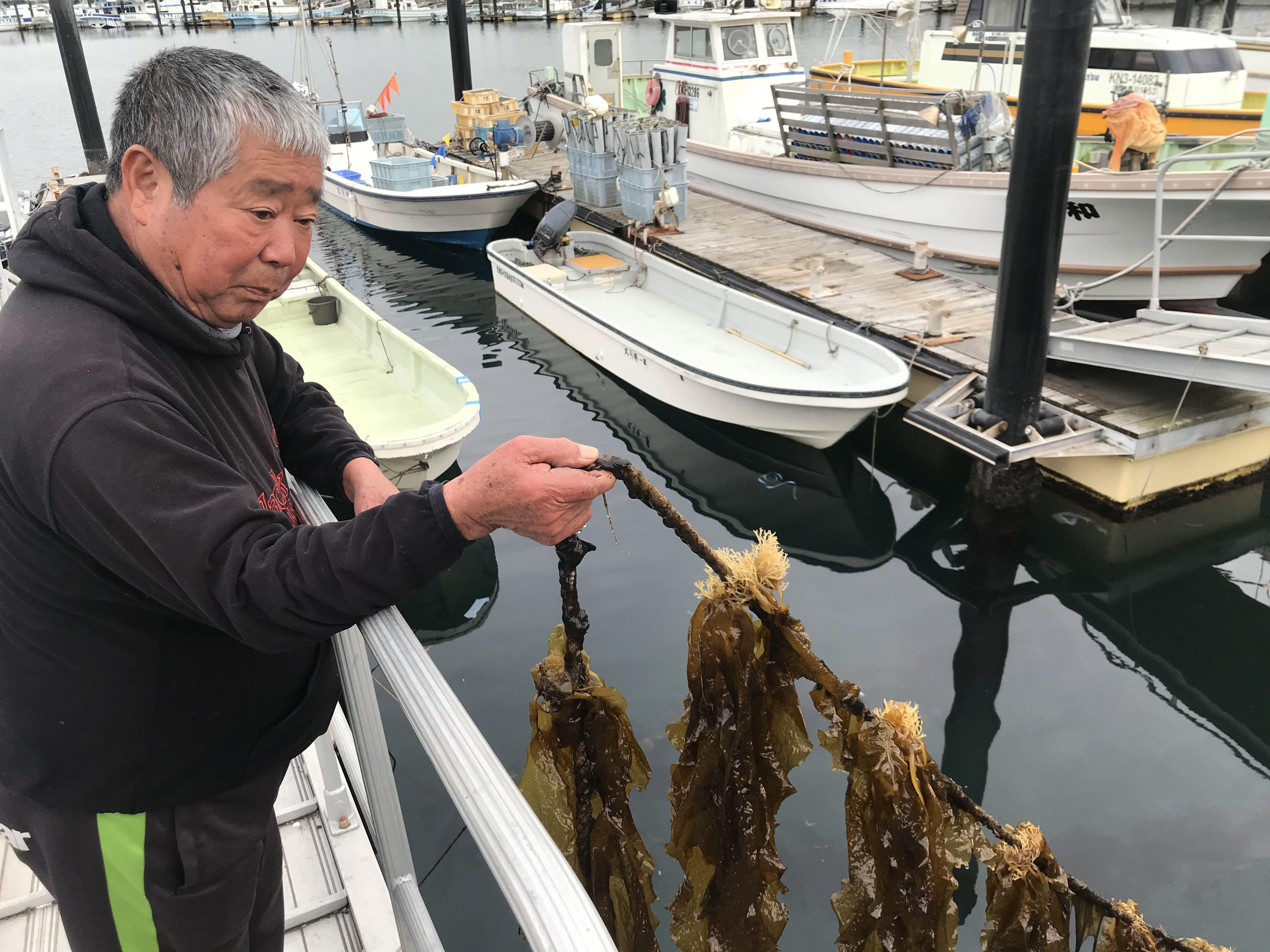 Kubatera-san showing cultivation of seaweed at the port