On May 4, 2019, Godfrey was invited to Kurayami Festival, Japanese traditional festival at Fuchu city with Shukulu Murekatete and Rodrigue Icishatse, exchange students from PIASS. Mr. Kazutaka Nakano, one of the supporters of Shukulu and Rodrigue, invited them to the festival. Please visit here for more details about their experience at the festival.

It was, of course, his first experience of Japanese festival, and he was enjoying the event so much. Here is his essay. 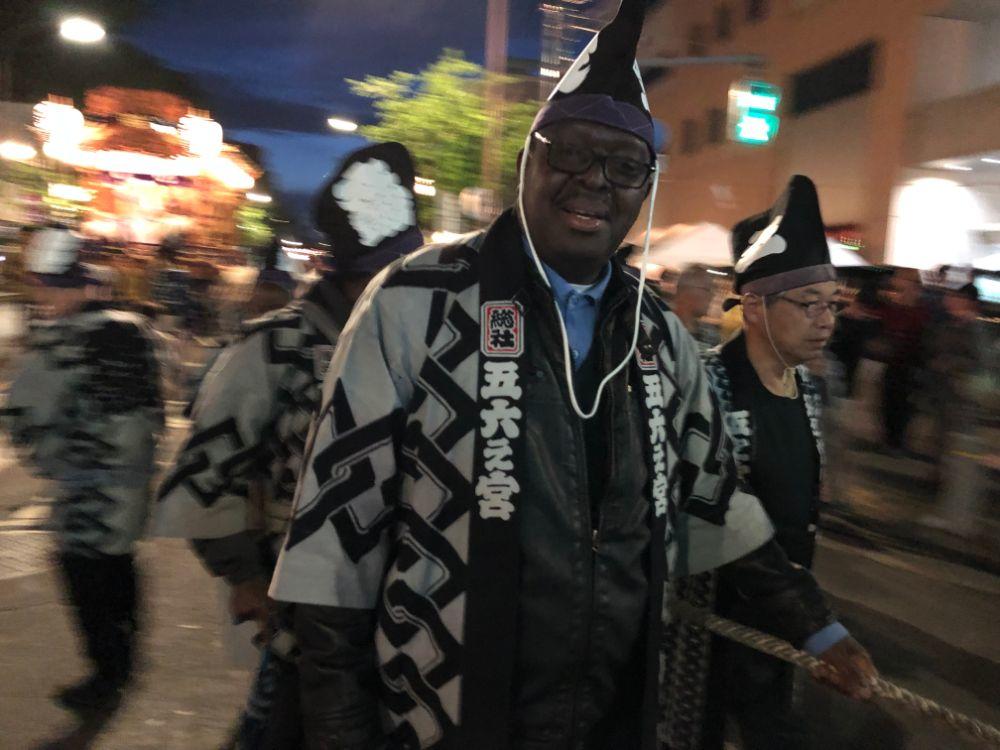 Godfrey gathered attention from Japanese since he got much more taller with the headgear called Eboshi.

The Kurayami Festival event took place from 3rd to 5th May 2019 at Fuchu in Tokyo. Shukulu Murekatete, Elie Rodrigue Icishatse and I were privileged to be invited to attend this festival on Saturday, the 4th of May 2019 with the facilitation of Ms. Natsuko Midorikawa. Upon arrival at Fuchu, we were warmly received by a Mr. Nakano and later his sister also joined. Mr. Nakano dressed us in the rightful attire for the event. We then proceeded to the main arena; the main Shrine where we paid homage.

The second activity that followed was witnessing the sounding of huge drums which as we were made to understand was meant to purify the roads in readiness for the passage of portable shrines. Later in the evening, we participated in pulling one of the carriages, and this attracted many on lookers who wondered in the first place how Africans could be dressed in that manner, and secondly how we would even be evolved in pulling a carriage.

Our presence as foreign visitors at the festival was also noticed by one of the organizers from the municipality who took time to explain to us the significance of the festival. She was happy that we participated in the event and took some pictures with us, and promised to upload them on their website. Eventually, we left the festival in the night around 09.00 PM after being treated to a sumptuous meal by Mr. Nakano.

I would like to conclude by stating that this festival was an exciting event in terms of cultural diversity across the world and will keep the attire which was given to us. It was indeed a Saturday well spent. Furthermore, I would like to thank Natsuko Midorikawa and Mr. Nakano for the wonderful hospitality at the festival.